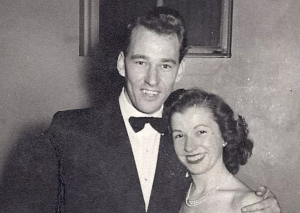 The late Dr. Barrie Strafford and his wife, the late Brenda Strafford.

The Brenda Strafford  Centre was established in January 1996 when it became apparent that there was a dire need in Calgary for long term accommodation and substantial supports for women and children exiting emergency shelters. The Brenda Strafford Foundation invited the heads of local crisis shelters and other active community members to form an Advisory Committee to suggest solutions to this very serious problem.

In cooperation with Calgary Housing Company, The Brenda Strafford Centre opened its doors to familes who had fled domestic violence. Throughout its history, the Centre has evolved to be one of the largest post-emergency shelters in the Country.

Heart Home Network ·
@BStraffordCentr
Our CDC team are having a little fun in honour of the Battle of Alberta NHL Playoffs between the Edmonton Oilers and Calgary Flames.

Heart Home Network ·
@BStraffordCentr
Canada needs a National Action Plan on violence against women to ensure that women in all areas of the country and across the world have access to comparable levels of services and protection.

Our message is simple: There is no place for discrimination in this world.